Let's get right to the point -- I do not think this is the end of the 2009 rally. See my previous Elliott Wave count for where I think this is headed. However I do think this minute C wave has some more to go (the /ES is at 1085 as I write on Thursday night) before we head back up.

Here are the wave signatures on the Chicken Oscillator that form part of the basis for my reasoning.

First, we see the classic wave signatures on the impulsive wave that consumed the first half of November.

Now let's back out and look at some longer bars that show the classic corrective signatures for the current correction. In particular, note how grossly exaggerated the current move is compared to the preceding corrective wave. This suggests that it is a C wave, and not the start of a massive downward move like a P3 type of event. The wave signature rule is: "C is an exaggerated spike."

Here's the daily. The short term oscillator is still in a bullish configuration (blue above white) and on top of that it's pinned above 80.

So bottom line, I am not that impressed with this sell off from an intermediate term perspective. If bears can start pushing the Chicken Oscillator around I'll pay attention. Of course, I have that luxury since I have no short term positions to micromanage and I have very distant stops in place on my long term longs.

But delusion is a powerful thing. Human beings need hope to survive, and we will cling to it as long as we can, even if it is false hope. The more terrifying reality is, the tighter we will hold onto that hope, and turn a blind eye to the facts that stare us in the face. It's simply human nature. And that's why I try not to be in the business of calling tops - especially at this moment in history.

Plenty of ways to count this mess, but I like this one. 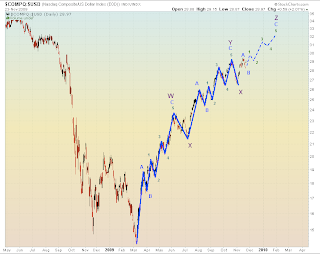 Bears were cocky after holding a gun to the bulls' collective head for the past few days.

Then today a mysterious package arrived. And like Morgan Freeman at the end of the movie Se7en, they had a sudden epiphany: John Doe has the upper hand!

This shouldn't be too terribly surprising. 1) I've said numerous times that this rally should end in an explosion of bullishness, not a whimper. 2) The bulls quickly and decisively reclaimed the One Line on the Transports last week - this is why I said bears needed to savagely kick the bulls while they were down or risk an ass kicking if they let them get up. 3) The Chicken Oscillator said as much as illustrated in the chart below.

The Dollar Index made a new low today by one penny. That's enough to immediately rule out my primary count (this is the beauty of Elliott - it gives you clear criteria that let you know the instant your hypothesis is wrong), so perhaps the alternate count in this post is what will play out.

If the dollar cannot find a bottom after another 5 wave thrust down then in my view, the near-term deflationist arguments will need to be reexamined. In any case, deflation is supposed to be a temporary phenomenon before inflation/hyper-inflation kicks in, so perhaps we'll switch gears early. Can't tell yet.

My posts will continue to be infrequent as I'm working on some other projects. But I'll chime in when I can. Suffice it to say that I won't be taking any short term positions until I'm back, but my long term portfolio remains long (non-leveraged index & mutual funds and some paper gold). Happy trading. 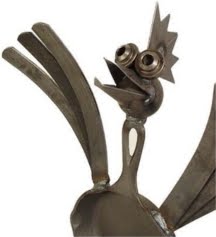